Adding New Listings
If you search for a song title and can't find it in the database, you can add a new song listing using the box below. New song listings will be approved by a moderator in 2-7 business days  and then appear live and searchable on the site. In order to make your listing as useful as possible, include as much of the requested information as you can. This database is set up so that others can add to your listings, so if there’s something you aren’t sure about, someone else may add it later. Include links to recordings of the song (video or audio), websites where printed scores of the song can be purchased or shared freely, the website of the composer who wrote it, or to sources of information about the history of the song or contexts where it is sung by others. When adding tags, check the wording and spelling against the filters in the dropdown menu to the right so that your listing will come up when others search for those terms.

We aim to share information as freely as possible while respecting the copyrights of composers and publishers. If the rights to a song is owned by someone else, you can let users know you like the song by creating a listing and adding links to the publisher or composer's websites so others can obtain recordings or printed copies of the song through the channels preferred by the copyright owners.

This is a great place to share new songs you've written! If you'd like help transcribing a song or finding tools to make a video or audio recording to share, email Rachel Kroh at [email protected]

Contributing to Existing Listings
You can also contribute by adding information, sharing tips or suggesting tags for existing song listings.
Adding information: Sharing songs orally means that over time, tunes change, words change, and information about a song's origin can get lost. We hope this database will give us a chance to combine the inspiring innovation and cross-pollination that are hallmarks of the oral tradition with the wonderful capability of the internet to store information contributed by a community of people. If you know a different version of a song, know another recording or written source, or were told a different version of its origin story--contribute it to the listing!
Sharing tips: You can also contribute your experiences of leading the song and make suggestions that might help others. What context did you lead it in? How did it go? Any tips that might help others have success leading the song paperlessly?
Suggesting tags: Finally, you can suggest tags we can add to the listing that will help others find it. Choose tags from the list of filters to the right, or if you don't see the tag you're looking for, go ahead and suggest it. We can easily add more filters to the menu to match your tags.

Using the Database
This database is a tool to help you build a repertoire of paperless song leading. You can use the tabs above to sort the listings by your preferred method for learning music (print, audio or video), or use the filters to the right to sort by category. You can also type keywords like a song title or composer's name into the searchbox in the upper righthand corner of your screen.

Please check your e-mail for a link to activate your account.

Spirits Rising is a powerful prayer for healing by Lisa Levine, a nationally known cantor, composer, recording artist, author and worship artist. The wordless refrain connects this song to the Hasidic Jewish tradition of niggunim, wordless tunes that are sung to enliven the soul and body.

The piece is useful for gathering groups, for services of healing prayer, and in interfaith contexts.

Additional verses can be found in the printed score.

Sheet music can be found in Music By Heart. A lead sheet of an earlier version of the song is also available for purchase.

Cantor Levine taught the song at one of the very first MMC workshops in New York City:

Here is another version of the song from her album Reaching For Peace:

Uyai mose / Come, All You People

This short gathering song from Zimbabwe is a wonderful introduction to paperless singing. Composed by Alexander Gondo, it is in Shona, a Bantu language spoken by almost 11 million people in the region. The four-part arrangement that appears in many hymnals and songbooks is by John Bell.

The song can be sung unaccompanied. If instruments are added, shekere (dried gourds) or marimbas would be appropriate to the context, not drums.

Pronunciation tip: Shona's five vowels are pronounced as in Spanish. Each vowel is pronounced separately even if they fall in succession.

Singing translation (I-to Lo):
Come, all you people, come and praise your Maker. (x3)
Come now and worship the Lord.

Copyright for the piece is held by GIA Publications, Inc. so you'll need a OneLicense membership to print the text or music.

You can find sheet music at Hymnary.org. The song is also printed in several denominational hymnals and Global Song Collections.

Lisa Littlebird has created teaching tracks for leaders who want to learn and teach parts.

This joyous setting of the Sanctus (Holy, Holy, Holy) by Puerto Rican priest and composer William Loperena, O.P. follows an antiphonal (call and echo) structure. Inspired by liturgical and musical reforms following the Second Vatican Council, it reflects the African heritage of Puerto Rico with its use of bomba, a popular, percussion-driven musical style that moves people to dance.

Each phrase is sung by the cantor and echoed back by the assembly, with one small melodic variation at the end of each section. Leaders often use their hands to cue the group at that moment.

Originally written in Spanish, an English translation by Jorge Lockward makes it possible for communities to experience the joys of bilingual singing.

Sheet music is available in Tenemos esperanza, an excellent collection of Latin American sacred song edited by Jorge Lockward. He has also included a Memorial Acclamation and Amen based on Loperena's melody. The piece also appears in several denominational hymnals and Global Song collections.

This powerful sending song by Ben Allaway has concluded many Music the Makes Community events. The phrases of the song can be taught through call and echo patterns, then the leader can use the African practice of singing instructions within the song to reverse their roles, invite harmony, and shape the energy song.

"From this house
to the world
we will go
hand in hand.

Ben has given faith communities permission to sing and share the song without copyright restrictions.

Sheet music can be found in Music By Heart, MMC's first collection of paperless music. The piece is also effective with choirs and has been published as an SATB anthem.

Here's a video of Ben leading the song at our Leader's Gathering at Holy Cross Monastery:

This penitential response was written by John Bell and incorporates call and echo learning to encourage community participation.

The assembly sings each phrase after the leader, except for the third phrase where the group overlaps the leader's last note. If possible, practice the response before worship and encourage the community to trust your gestures, even if they feel as if they're 'interrupting.'

The piece can be sung a cappella or accompanied by a drone instrument (a shruti box or a soft unison or open fifth on the organ) to support the community's voice. John Bell suggest quiet keyboard accompaniment or a choir singing the notated harmonies.

Copyright for the piece is held by GIA Publications, Inc. so you'll need a OneLicense membership to print the text or music.

Sheet music can be found in There Is One Among Us, published by the Iona Community.

Here's a recording of the piece by the Wild Goose Worship Group:

Our Father in Heaven (Plainsong setting)

This plainsong setting of the Lord's Prayer was adapted for paperless singing and gestures by MMC founder Donald Schell. The melody is ancient, possibly reaching as far back as first and second century synagogues. The gestures are adapted from ancient Christian postures of prayer.

The setting is essential call and echo, with the leader singing and gesturing one phrase at a time, with the assembly following. Full kneeling (prostration) is not required, but an invitation can be given to the group to adapt the gestures to their body's comfort and ability. 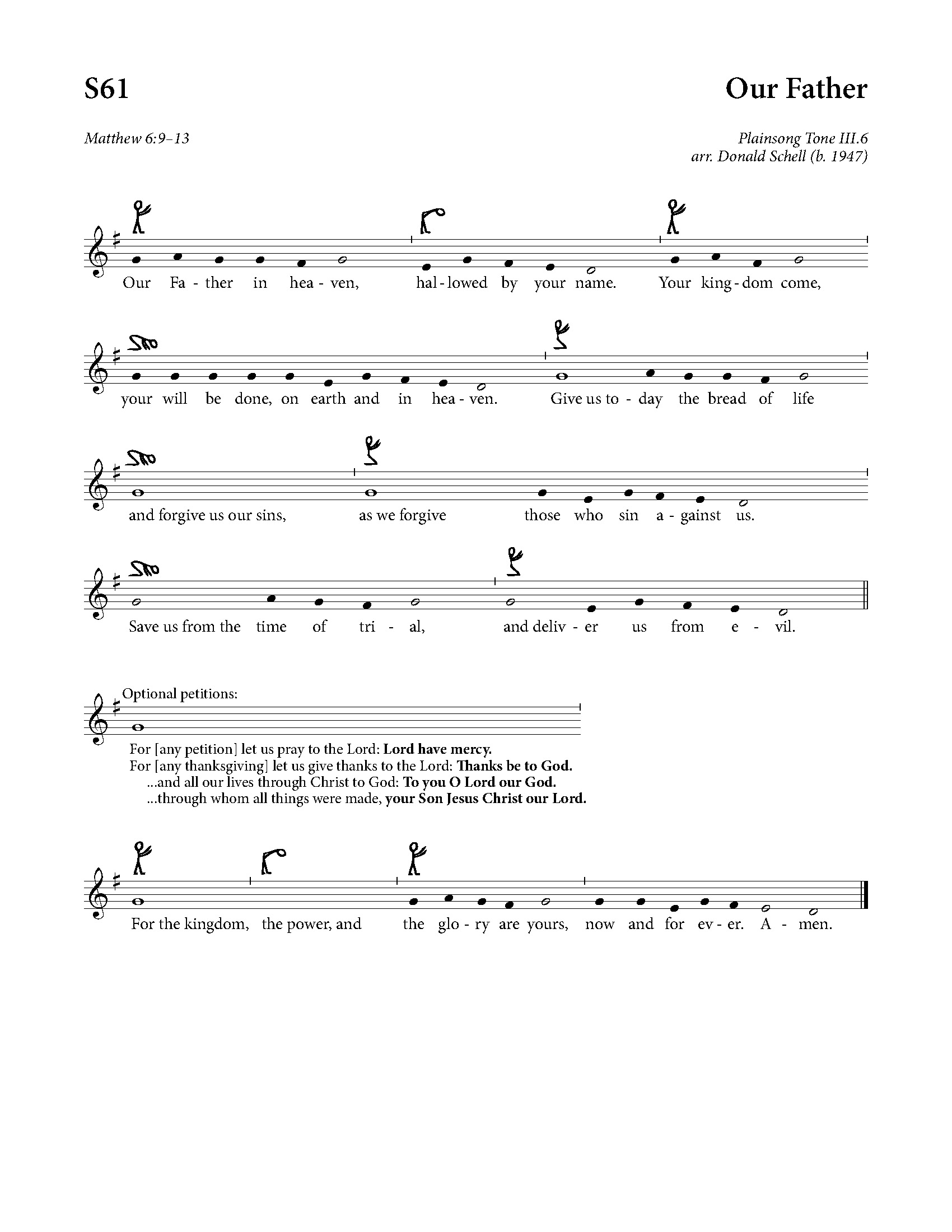 Here is a video of Donald Schell teaching the setting at one of MMC's first workshops at St. Paul's Chapel in New York City:

Amen Siakudumisa is a praise song by Stephen Molefe, a talented South African musician who was one of the first to compose indigenous liturgical music following the Second Vatican Council. Written in Xhosa, one of several languages spoken in the country, it was intended to be sung as the “Amen” at the conclusion of the Great Thanksgiving of the Eucharist liturgy. It is also useful as a Doxology, as a psalm refrain, or as a song of praise.

The piece would usually be accompanied by marimbas; drums are not commonly used in Xhosa song. Learn more about the history and context of Amen Siakudumisa in this excellent blog post by Dr. Michael Hawn.

Find sheet music for the song on Hymnary. It is also published in several denominational hymnals and songbooks.

And here is a song leader tutorial from St. Lydia's in Brooklyn, modeling how you might teach the song to a group.